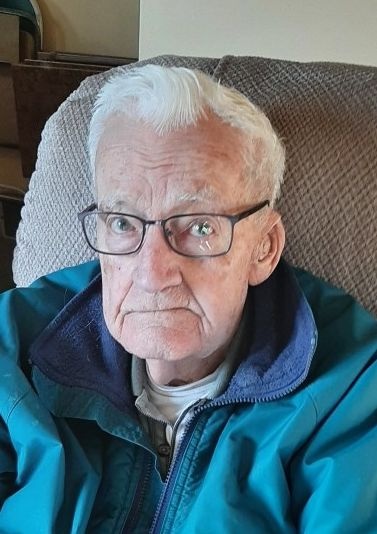 Charles E. Nichols, 99, passed away on Thursday, August 5, 2021, at Prairie Homes Assisted Living, Menasha. He was born on July 29, 1922, in Harwich, MA the son of William and Ada (Cahoon) Nichols. Charles grew up on Cape Cod, where he developed his love for seafood, especially crab. Charles met Dorothy Mae Draeger in Chicago while serving in the U.S. Navy for 6 years, 1 month, and 1 day. After his honorable discharge from the service on July 17, 1947, they married on September 13, 1947, at St. Rose Catholic Church, Clintonville. Charles and Dorothy spent 66 wonderful years together before the passing of Dorothy in 2014. They lived in Clintonville for several years before building the family home in Menasha.

Charles worked for Kimberly Clark for 30 years and part-time for Al Haack Heating. Charles was a proud World War II Veteran who loved to share his many stories of his service. He was an avid bowler and golfer who enjoyed playing these two sports well into his 90s. When he was 92 years old, he mastered his first hole in one at Winnegamie Golf Course! Charles and Dorothy enjoyed playing cards with their family and friends throughout the years. He was a member of the Knights of Columbus Nicolet Council 1838, Menasha American Legion Post 152, and the Menasha VFW Post 2126.

Charles was preceded in death by his loving wife Dorothy; parents; and siblings: Seviah, Carrie, Mary, Myra, Carmine, and Francis.

Funeral services for Charles will be at 11:00 am, on Friday, August 20, 2021, at St. Mary Catholic Church, 528 Second St., Menasha. Visitation will be on Friday at the church from 9:30 am until the time of the Mass. Full military honors will be presented immediately following the Mass. Interment will take place at St. John Cemetery, Menasha. In lieu of flowers, memorial contributions are appreciated to the Old Glory Honor Flight.

Charles’ family would like to thank the staff at Prairie Homes for the care they provided Charles during his stay and to the ThedaCare at Home and Hospice team for their assistance, especially nurse Briana.

To order memorial trees or send flowers to the family in memory of Charles Edward "Nick" Nichols, please visit our flower store.