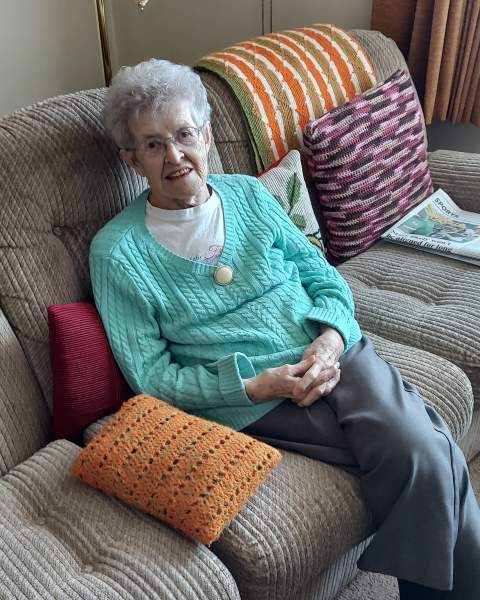 Prior to their marriage, Toos was friends with Leo's sister and was visiting one rainy night when his mother insisted that he take this beautiful little lady home on his bike, so she doesn't blow away.  From that grew a wonderful relationship that was to last almost 64 years. Along with a big move from the Netherlands to start a new life, they grew in their careers, grew a family, and lived a life filled with great friends, plenty of travel, and visits from the relatives as well. Toos was soft spoken, but she ran a well-oiled machine as far as the house was concerned. Whether it was just the family or family +8 guests, Mom had everything covered. Her boys were well raised, grew to be successful and blessed her with wonderful grandchildren who became the centerpiece of her love. Nothing can compare to how her face lit up with her smile when the grandkids were around. And nothing can compare to the kind soul that she possessed.

We would like to thank the angels they have working as Nurses at Theda Care Neenah - Heather (ICU), Andrea, Mary, and Rianne (5th Floor), the ER Crew, and Kelly and Wendy (Hospice Nurse and SW).

A funeral liturgy for Toos will be held Friday September 9, 2022 at 11:00am, at Holy Spirit Catholic Church 602 E Kimberly Ave, Kimberly;  friends and family may gather at the church from 9:00am until the start of mass.  Toos will be laid to rest at Holy Name Cemetery in Kimberly.

Toos' funeral mass will be live-streamed on Friday. Please use the link under service schedule to access the stream.

In lieu of flowers, please consider a donation to act.alz.org (Alzheimer's Foundation) in support of finding a cure and providing support to caregivers of those with dementia and/or Alzheimers.

To order memorial trees or send flowers to the family in memory of Catharina A. Van Oursouw, please visit our flower store.

Send a Sympathy Card
Make a donation to Alzheimer's Association - National Office in memory of Catharina A. Van Oursouw
​