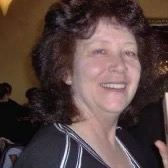 Brenda was a very hard worker who did many different things for work over the years. She was a loving wife, mother, and grandmother who’s love for her family and friends was fierce.  She enjoyed cooking, and was known for her Lasagna, Chicken Spaghetti, pasta salad, potato salad, and pancakes. She was a feisty woman who had a great sense of humor. She also loved working on her yard on her flowers and plants. Brenda loved music and dancing. In her younger years, she enjoyed going out dancing with her sisters. As her family grew, she loved dancing with her daughters. She enjoyed going on roadtrips, but the trips were rarely planned. Brenda and David would often just get in a car and drive. The journey was the reward.

She will be sadly missed by her husband David, children: Kim Lewis of Appleton, Dawn (Paul) Fane of Clayton, Carrie (sp friend Tony) Hendrickson of Menasha, Anna (sp friend Chaunte) Hendrickson of Kimberly. Brenda had only daughters. She always hoped for a boy, so she was blessed to have all her first grandchildren be boys. She is further survived by grandchildren Grant and Nolan, Joshua and Kaylee, Justino, Alyssa, Alphonso, and Zaedyn, Mundo, Ariana, and Jayden, great-grandchildren: Lamar, and Daxton, brothers and sisters: Dennis Morgan, Duane (Debbie) Morgan, Cindy (George) Petrasko, Pamela (Les) Haack, and Dawn (Larry) Strutz, a very close family friend, Harold, as well as many other relatives and friends.

She was preceded in death by her parents, sister Rosalee, and her close friend Maria.

There will be a memorial service for Brenda on Saturday, May 1, 2021 at 5:00pm at the Wichmann Funeral Homes, Tri County Chapel with Deacon Don Schultz officiating. There will be a gathering following the service until 7:00pm at the funeral home. For more information and to express condolences, please visit www.wichmannfuenralhomes.com.

The family would like to thank the doctors, nurses and staff at St. Elizabeth Hospital. In the short time Brenda was there, she became family.

To order memorial trees or send flowers to the family in memory of Brenda Hendrickson, please visit our flower store.