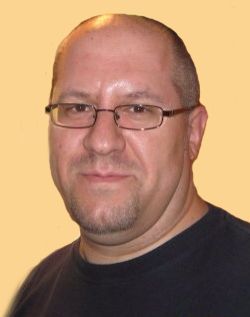 Brad Kulick, age 42, of Appleton, passed away on Tuesday, April 22, 2014, at Appleton Medical Center, following a courageous battle with cancer. Brad was born on September 20, 1971, in Appleton, to Phyllis (Leonhardt) Kulick and the late Bill Kulick. He married Julie Bates on June 11, 1994, in Appleton. Brad was a Network Engineer at Connecting Point in Green Bay for over 13 years. He was very technology-oriented and was always eager to help friends with their computer and technology concerns. Brad was well-known for his quick-witted and insightful sense of humor. He was a loving husband, father, son and uncle who always put family first, even during his final illness. He fully enjoyed the time spent with his wife and children, especially while at Disney World.

Survivors include his wife of 19 years, Julie; his children Cameron and Caden; his mother, Phyllis Kulick; his brother-in-law, Tracy (Jenny) Bates and their children Lilly and Charlie; his sisters-in-law, April (Rick) LaChapelle and their children Izzie and Violet, and Laura (Mike) Binkowski; and Julie's parents, Jeff and Cathy Bates. Brad is further survived by many other relatives and close friends. He was preceded in death by his father, Bill; his sister, Brenda; and his brothers Brian and Joseph.

Funeral services will be at 1:00 p.m. on Saturday, April 26, 2014, at WICHMANN FUNERAL HOME—TRI-COUNTY CHAPEL, 1592 Oneida Street, Menasha, with Rev. Jim Rademaker officiating. Friends may call directly at the funeral home on Saturday from 11:00 a.m. until the time of services.

Brad's family would like to extend a sincere thank you to Julie's brother and sisters, and Brad and Julie's friends Chris Reuss, and Keith and Brenda Heiman, for their loving care, friendship and support during Brad's illness. They would also like to thank John Tiedt, Rick Chernick, and all of Brad's co-workers, and the staff at Fox Valley Hematology, for their prayers and loving care. A memorial has been established for Brad on the Soleburner website; please go to “Get Involved” and “Donate to a Participant” (Team Brad). Online condolences may be offered at www.wichmanfargo.com

Brad, Thanks for making us your priority and loving us above everything else.

To order memorial trees or send flowers to the family in memory of Brad Kulick, please visit our flower store.