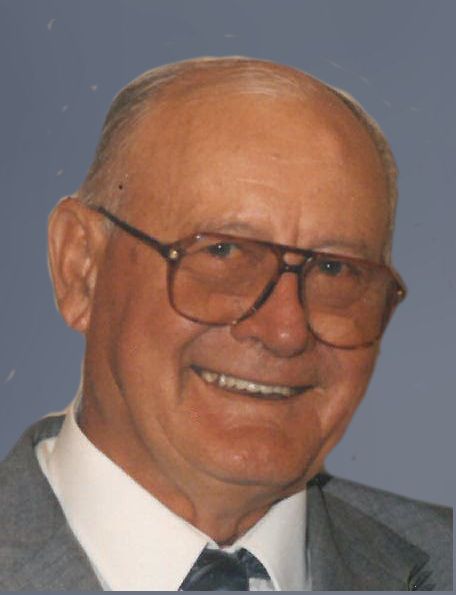 Barney Driessen, age 95, passed away at St. Paul Home in Kaukauna on Saturday, December 2, 2017. Barney was born in the town of Woodville on September 2, 1922, son of the late Michael and Bertha (Ver Bockel) Driessen. He married Mary Van Roy on February 7, 1946.

Barney was a life-long member of St. Katharine Drexel (St. Francis) Parish in Hollandtown, worked on the family farm for over forty years, worked at Thilmany Pulp and Paper, and plowed snow and worked on the town roads in Woodville for many years before becoming Town Chairman. He held the Chairman position for twenty-four years. Being a busy man, he also found time to work at the Dundas Canning Factory as well as delivering milk and eggs to migrant workers in the area.

Barney was a very active member of the Dusty Trails Snowmobile Club, and drove his four-wheeler well into his 90’s. He had a great love of fishing, bowling, baseball, and playing sheepshead, cribbage, and scott with his many friends. He enjoyed being an umpire in Hollandtown for the youth baseball program, loved to watch his sons play football, and loved to cheer on the Packers and the Brewers. Two of his great joys were going to Dan and Lyn’s cottage up north, as well as trips to the casino.

The funeral liturgy for Barney will be held at 12:00 Noon on Wednesday, December 6, 2017 at ST. KATHARINE DREXEL PARISH – ST. FRANCIS CHURCH in Hollandtown, with Msgr. James Vanden Hogen officiating, assisted by Deacon Steve Vande Hey, Pastoral Leader. Burial will follow in the parish cemetery. Family and friends are invited to gather at the church on Wednesday morning from 9:00 AM until the time of the service.

Barney enjoyed spending time with all of his family. He especially loved his grandchildren and his extended family of grandchildren that became his family. He was loved and admired by many, and will be greatly missed. Now he is at peace and has joined his many family members in heaven.

Barney’s family would like to extend their sincere thanks to everyone at St. Paul Elder Services and St. Paul Hospice. You cared for our dad like he was your very own, and we will always be grateful for your love, care, and compassion. God bless you all.

To order memorial trees or send flowers to the family in memory of Bernard "Barney" Driessen, please visit our flower store.