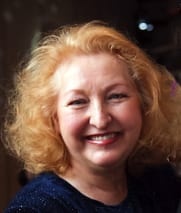 Bernadette Marie (Rychter) Stoegbauer of Appleton, passed into eternal life on February 8, 2020 surrounded by family as she lost the battle to cancer. She was born on September 9, 1950, in Stevens Point, Wisconsin to the late Stanley L. and Grace H. (Ganski) Rychter.

She grew up on the family farm in the Township of Dewey. Bernadette was raised across the road from St. Mary’s church of Torun and the one room country school house next to it. Both were instrumental in nurturing her deep faith and education. She graduated in 1968 from Maria High School in Stevens Point, Wisconsin and then went on to graduate from the City College of Cosmetology in Appleton, Wisconsin and continued her education at Fox Valley Tech in Appleton. She was a beautician for many years before becoming a selling supervisor at Kohl’s Department Store.

On May 10, 1986 she married William Stoegbauer at St. Therese Catholic Church in Appleton. Bill and Berni were blessed with a son Michael, daughter-in-law Stephanie, grandchildren Ellie and Ethan who were the joy of her life.

Family was the most important thing in her life. Whether it be watching Hayden and Sutton (sons to Tina (Rychter) Krug) and Mitch Krug when they were young, or the countless family functions where she would arrive with her bubbly personality, positive energy, and infectious smile. She could also be found attending nieces, nephews, great-nieces and nephews sporting events, recitals, graduations and any other event that might bring people together. Bernadette also enjoyed volunteering, particularly helping the Readers are Leaders program, and also first grade religion classes at St. Therese in Appleton.

Berni also enjoyed traveling with her husband and was fortunate to go on numerous trips throughout the country, where they built a number of wonderful memories. The most treasured of all was Disney World with Mike, Steph, Ellie and Ethan.

Her encouraging cards, texts, and emails brought joy to all. They will be missed and cherished by those blessed enough to have had her in their lives. As she always signed things, it is now our turn. HUGS TO YOU BERNI. XXOO.

Funeral Liturgy for Bernadette will be on Monday, February 17, 2020 at 10:30am at St. Joseph Catholic Church, 410 West Lawrence Street in Appleton with Fr. Jim Leary, O.F.M. Cap officiating. There will be visitation on Sunday, February 16, 2020 from 4:00pm to 7:00pm at Wichmann Funeral Homes, 537 N. Superior Street in Appleton. There will be a Parish Prayer Service on Sunday at 7:00pm. Visitation will continue on Monday morning at the church from 9:00am to 10:30am. For more information and to express condolences, please visit www.wichmannfuneralhomes.com.

The family would like to thank all the doctors, nurses and staff that helped in Bernadette’s care. Also, special thanks to the Heartland Hospice team, specifically Crystal, Shannon, and Jenny who helped in the final weeks.

To order memorial trees or send flowers to the family in memory of Bernadette Marie Stoegbauer, please visit our flower store.