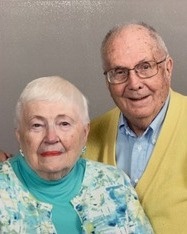 Arden was born on October 12, 1933, in Milwaukee, daughter of Albert and Gertrude (Stephenson) Lutz. Arden attended Wauwatosa public schools until graduation in 1951. She graduated from the Milwaukee Hospital School of Nursing in 1954. Arden worked as a nurse until the birth of her first child in November 1955. She returned to nursing in 1970 when her family moved to Appleton. She worked for 20 years in the Maternity Unit at Appleton Medical Center.

Bill was born on October 1, 1926, in Trinidad, CO, son of Arthur and Meryl (Dunham) Thomas. Meryl passed when Bill was just two years old. The Lord blessed him with his stepmother, Esther Thomas, seven years later. Bill was drafted into the United States Navy at age 18 in February 1945. He was fortunate to continue his education while in the service. Bill returned to Colorado after he was discharged from the Navy in June 1946 and earned a degree in electrical engineering from Colorado State University. He moved to Wisconsin when he was hired in June 1949 by Allis-Chalmers in West Allis, doing market research and sales promotion. He retired from Allis-Chalmers after 37 years, and then taught math at Fox Valley Technical College for five years.

Bill and Arden met in 1951 at a church young adult dance in Wauwatosa. The two bonded quickly with Christ guiding them. They were married on October 9, 1954. They enjoyed raising a family of five children in Wauwatosa. Bill, Arden, and their children moved to Appleton when Allis-Chalmers transferred Bill in 1970.

Both Bill and Arden were active in their church. Arden especially enjoyed singing in the church choir. She volunteered as a driver for FISH, as well as volunteering for many years in Pastoral Care at Appleton Medical Center. She also enjoyed reading the Appleton Post Crescent newspaper and playing cards and games. Bill volunteered with Encircle Health and enjoyed reading books and playing Sheepshead. He also spent many hours at his computer researching the family’s genealogy and tracking and managing the family’s finances.

Bill and Arden will be missed by their loving children: Jeffrey (Mary) Thomas of Santa Rosa, CA, Amy Thomas of Germantown, Timothy (Theresa) Thomas of Berkeley, CA, Andrew (Jacqueline) Thomas of Wilsonville, OR, and Christopher (Renee) Thomas of Madison; and grandchildren: Ian and Leah Thomas, Andrew (Joshua) Schultz and Laura Schultz, Vivianna, Vayne and Vallon Thomas, Morgan Thomas and Alexandra (Garrett) Thomas-Staples, and Ella and Charlotte Thomas; they are further survived by many other family and friends.

They are welcomed to heaven by Bill’s parents: Arthur and Meryl Thomas; stepmother: Esther Thomas, and sisters: Barbara Shader and Helen Crosby; and by Arden’s parents: Albert and Gertrude Lutz; and brother: David Lutz.

Just as Bill and Arden stood at the altar 67 years ago pledging to love one another forever, family and friends will have the opportunity to make the same pledge to them during their joint memorial service. The service will be held at 11:00 am on Saturday, October 15, 2022, at FIRST UNITED METHODIST CHURCH, 325 E Franklin St, Appleton, WI, with Pastor Dave Farina officiating. Visitation will be held at the church from 10:00 am until the time of service. Bill and Arden will be inurned at Highland Memorial Park.

Memorials to First United Methodist Church in Appleton or a charity of your choice are appreciated.

“The world changes from year to year, our lives from day to day, but the love and memory of you, shall never pass away.” (Unknown)

To order memorial trees or send flowers to the family in memory of Arden & Bill Thomas, please visit our flower store.

The joint memorial service for Arden and Bill Thomas