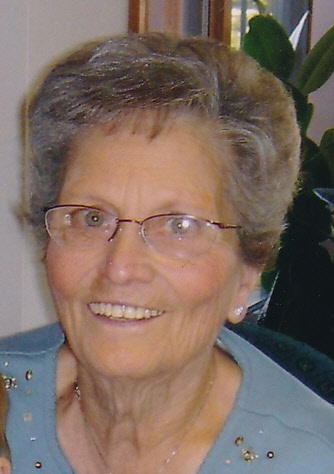 Anne M. DeWall, age 86, passed away on June 15, 2012 at St. Elizabeth's Hospital in Appleton. She was born in Kimberly on October 13, 1925, the daughter of the late William and Johanna (Royendyk) DeKleyn. On May 4, 1946 she married Lloyd P. DeWall in Kimberly. They were blessed with five children. In 1962 they became members at St. Pius X Catholic Church. Anne volunteered at St. Elizabeth's Hospital for over 37 years. She enjoyed feeding the birds and watching them from her back deck, tending to her seasonal flowers, going on bus trips to casinos and cheering on her favorite team the Brewers. Anne loved traveling on the annual trip she took with her daughter Janet. Anne's family was her pride and joy. She loved spending time with them and going to the “buffet” for lunch.
She is survived by five children: James W. DeWall of Shawano, David (Lynn) DeWall of Appleton, Janet (Tom) VanLieshout of Appleton, Charles E. (Elizabeth) DeWall of East Troy, and Edward P. DeWall of Appleton; eight grandchildren: Chad (Julie) DeWall, Bobbie (Dave) Doucette, Jenny Verdi, Brian (Autumn) DeWall, Jessica (Benjamin) Jagoe, Trisha (Timothy) Williams, Tiffany and Christopher DeWall; seven great-grandchildren: Megan, Devin, Tristan, Levi, Andrew, William, and Eleanor; one brother: Theodore (Loretta) DeKleyn and one sister-in-law: Sylvia Sundin. Further survived by other relatives and dear friends. She was preceded in death by Lloyd in 1994, one brother: Willard DeKleyn and one grandson-in-law: Fred Verdi.
Mass of Christian Burial will be held at 5:00 PM, Tuesday, June 19, 2012 at St. Pius X Catholic Church, 500 West Marquette Street, Appleton; with Father Ryan Krueger and Deacon Rick Simon officiating. Friends and family may call at the church from 2:00 PM until the time of Mass. Entombment will take place at Highland Memorial Park.
The family would like to express great thanks for the care and support that they received from everyone at St. Elizabeth's Hospital. Your kindness will never be forgotten.
Mom, you were not only my mother, you were my best friend. I will miss you immensely ~ Janet.
I will miss doing your projects and watching the Brewers together. ~ Charlie
I will truly miss you, “Ready to go Mom?”- “Yup.” ~ Edward
Online condolences may be expressed at: www.wichmannfargo.com

To order memorial trees or send flowers to the family in memory of Anne M. DeWall, please visit our flower store.