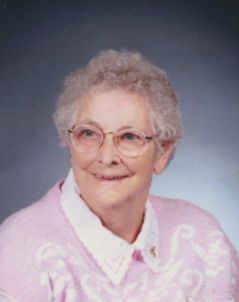 Anna always had a very strong faith and was a longtime member at Holy Cross Catholic Church. She always loved attending mass, especially the early morning mass at 5:00 a.m. Anna also cared deeply about her family.

She was a hard worker and lovingly cared for her ten children. She enjoyed staying close and visiting with everyone. She was an avid card player and especially enjoyed playing sheepshead with her card club friends. She liked watching and cheering on the Packers. She also had fond memories of the time she spent working with friends and staff at Monte Alverno. Anna was loved dearly by her family and will truly be missed.

Funeral liturgy for Anna will be held at 11:00 a.m. on Monday, March 3, 2014, at HOLY CROSS CATHOLIC CHURCH, 309 Desnoyer Street, Kaukauna, with Fr. Tom Pomeroy officiating. A time of visitation will be held at the church from 9:00 a.m. to 11:00 a.m. She will be laid to rest at Highland Memorial Park. In lieu of flowers, a memorial fund is being established. Online condolences may be expressed at www.wichmannfargo.com.

Anna's family would like to thank the staff and nurses at Parkside for their care and concern of Mother during her time there. Also thanks to Dr. Russo for all the years of fine care. To the Nagan and Oudenhoven families, Dan, Sheri, Mandy, Bob and Diane, you are special, we will always remember your kindness. She enjoyed all of the times spent with your families. Also to special nieces Betty, Janice and Joanne. Thank you all.

To order memorial trees or send flowers to the family in memory of Anna F. Verkuilen, please visit our flower store.