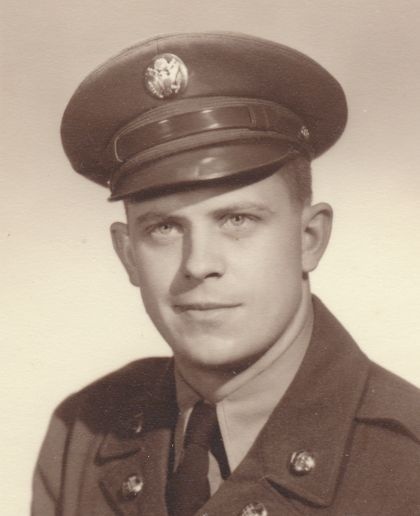 Allen Jorgen Hansen, age 87, of Appleton, passed away peacefully on Thursday, December 21, 2017 at Cherry Meadows Hospice surrounded by his children. He was born on April 18, 1930, in Gillett, WI to the late Edward and Laura (Larsen) Hansen. On August 21, 1954, Allen married Stephanie Alice Mack in Riverside, IL. The couple enjoyed 62 wonderful years together prior to her death on March 12, 2017.

Allen was an accomplished athlete who loved playing multiple sports at Menasha High School, such as football, baseball, basketball and track earning 13 letters and going to state in basketball in 1948. In addition to being a talented athlete, Allen was also an excellent student, and was a member of the National Honor Society. After high school he played Minor league baseball for the Chicago White Sox until he was drafted into the Army where he served in the Korean War from 1951-1952 in the Second Infantry Division going from draftee to Master Sergeant in 23 months and received a Purple Heart after being wounded in two separate incidents. He recently had the opportunity to fly on an Old Glory Honor Flight with his son, which meant so much to him. On discharge he entered the University of Miami where he majored in mechanical engineering where he met Stephanie. On starting his career, Allen and Stephanie decided they wanted to return to a smaller area, bringing them back to his roots in Appleton. He worked as sales manager with Overly Corporation in Neenah. The last 20 years of his working career he was a General Manager of Appleton Manufacturing Division of Menasha Corporation, work that took him all over the US and abroad. He also enjoyed tennis, golf, and softball until his late 70’s when declining health prevented him from participating any longer. He loved watching his grandchildren play sports, especially when they played against Menasha, his alma mater.

Allen played in the High school band and also played the saxophone in a dance band, The Flats and Sharps. His greatest joy on Christmas Day has been playing Christmas Carols with his grandchildren who are 25% Norwegian. Each grandchild plays their instrument of choice and have been named the Norwegian Viking Band, after his Norwegian roots (100%).

He was a longtime member of Trinity Lutheran Church of Appleton, the Appleton Downtown Rotary Club (35 years), Sons of Norway, American legion and a past board member of the Fox Valley Symphony. Allen loved the outdoors, especially hunting and fishing, which he shared with and passed down to his family. Spending time up north on White Lake near Suring, WI with his family were cherished memories. White Lake was his favorite place to be and he loved watching his grandchildren fish off the dock and enjoy water sports on the lake from his screen porch.

Allen is survived by two children: Bradford (Lisa) Hansen of Appleton and Lisa (Craig) Christensen of Appleton; seven grandchildren: Alec, Danielle, William, Caroline, and Ian Hansen and Kelsey (fiance Matthew McCauley) and Eric Christensen. Other survivors include his sister: Carol Danke of Menasha, and a brother-in-law: Bradford (Dale) Mack of Stuart, Florida. There are also many nieces, nephews, other relatives, and many friends. Allen was preceded in death by his wife, Stephanie, parents, and by a brother-in-law: Don Danke.

A memorial service for Allen will be held at 11:00 AM on Saturday, January 6, 2018, at Wichmann Funeral Home, Tri County Chapel, 1592 Oneida Street in Menasha, with Rev. Brian Bankert of Trinity Lutheran Church officiating. Inurnment will be at Riverside Cemetery. Family and friends are invited to gather at the funeral home on Saturday morning from 9:00 AM until the time of the service. For more information or to share a memory of Allen, please visit www.wichmannfargo.com.

We would like to thank the caring staff at The Heritage, ThedaCare At Home Hospice and Cherry Meadows Hospice for the compassionate and loving care of our father during the last months of his life.

In lieu of flowers, memorials in Allen’s name may be made to the Old Glory Honor Flight.

To order memorial trees or send flowers to the family in memory of Allen Jorgen Hansen, please visit our flower store.