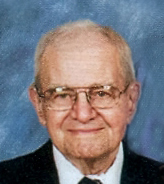 During World War II, Al served in the United States Navy in the Mobile Fleet Post Office. He was awarded the Asiatic Pacific Ribbon, Philippines Liberation Ribbon, Bronze Star, Victory Medal, and American Theatre Ribbon. In 2010, he was honored to have been the oldest veteran on the Old Glory Honor Flight, which he enjoyed with his son Tom. Al was currently a member of the Electric City Post #41 of the American Legion and the Past Commanders Club. He was also the Post Service Officer for over thirty-five years.

The Christian Funeral for Al will be held at 1:30 PM on Wednesday, May 23, 2012, at TRINITY EV. LUTHERAN CHURCH, 804 Grignon Street in Kaukauna, with Rev. Karl Schultz and Rev. Timothy Wilkens officiating. Full military honors will follow the service. Interment will be in the church cemetery. Friends may call directly at the church on Wednesday from 11:30 AM until the hour of the service.

In lieu of flowers, a memorial fund is being established to assist the Radio Broadcast Fund at Trinity Ev. Lutheran Church.

To order memorial trees or send flowers to the family in memory of Alfred W. Marzahl, please visit our flower store.