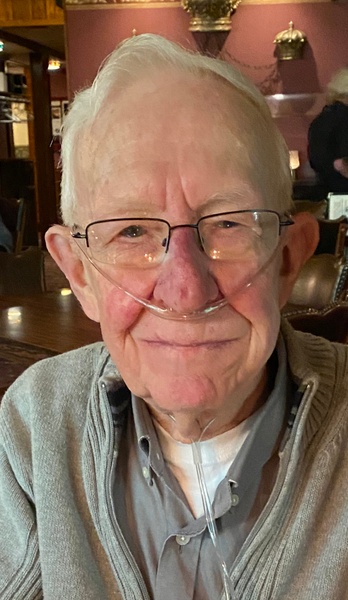 Alden Guy Ferguson, also known as “Fergie,” passed away peacefully on Wednesday, March 30, 2022, surrounded by family. He was born in Laona, Wisconsin on June 21, 1928 to Guy L. Ferguson and Alice Vesta Ferguson (nee Maybee). He grew up in Crandon, Wisconsin, before moving to Sheboygan, and then to Oshkosh, where he graduated in 1946 from Oshkosh High School.

During high school, Alden became hooked on a career in printing, and pursued his studies at Stout Institute in Menominee, Wisconsin. After serving in the Army in Korea during the war, he worked 25 years for Castle-Pierce Printing Company. Alden purchased Service Litho-Print in 1972 and substantially expanded its printing facilities, before selling that business and retiring at age 55. He then invested in apartment buildings, and was very active in the Fox Valley and Wisconsin Apartment Associations.

Alden was an EAA member and avid ultralight pilot, and he volunteered at EAA conventions in Oshkosh with his local ultralight chapter over many years. He traveled the world with his wife, Susan, and they participated in scuba diving, skydiving, motorcycle riding. Alden also enjoyed deer hunting during both bow and gun seasons, and an annual family canoe trip on the Crystal River in Waupaca County, to celebrate his birthday and Father’s Day.

A remembrance gathering will be held Friday, April 8, from 3-6 PM at Fiss & Bills-Poklasny Funeral Home, 865 South West Haven Drive, Oshkosh (Zoom available). A celebration of Alden’s life and the many lives he touched is planned for summer 2022.

Gifts in Alden’s name can be made to the Military Veterans Museum and Education Center, 4300 Poberezny Road, Oshkosh, Wisconsin, 54902.

To order memorial trees or send flowers to the family in memory of Alden Guy Ferguson, please visit our flower store.