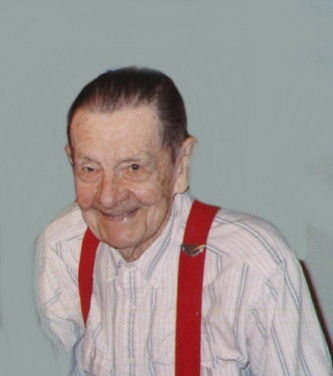 George Rozmarynoski, age 93, passed away on Monday, April 15, 2013 at St. Elizabeth Hospital in Appleton following a brief illness. George was born in Pine Grove, Wisconsin, on July 18, 1919, son of the late Albert and Stella Rozmarynoski. On April 27, 1946, he married Mary Conroy in Pine Grove; she preceded him in death in 2008. For many years, George was employed by the H.C. Prange Company in downtown Appleton. He enjoyed spending time at his property near Brillion, and in his later years tended to projects around his home and yard.

He is survived by a son: David (Sue) Rozmarynoski of Appleton; two grandchildren: Abraham Rozmarynoski and Katie (J.P.) Fleming; and three great-grandchildren: Sam, Max, and Wyatt. George was preceded in death by his parents, his son Dan in 2004, his wife Mary in 2008, brothers Ed and Ray, and a sister Clara.

The funeral liturgy for George will be held at 11:00 AM on Friday, April 19, 2013 at SACRED HEART CATHOLIC CHURCH, 222 E. Fremont Street in Appleton. Fr. Rene Balbero will officiate, and entombment will follow at Highland Memorial Park. Friends may call directly at the church on Friday morning from 10:00 AM until the time of the service. A memorial fund is being established at Sacred Heart Catholic Church. Online condolences may be offered at www.wichmannfargo.com.

The family would like to offer their sincere thanks to all of the caregivers at St. Elizabeth Hospital 4-South for their care and compassion. We will never forget your kindness.

To order memorial trees or send flowers to the family in memory of Albert "George" Rozmarynoski, please visit our flower store.