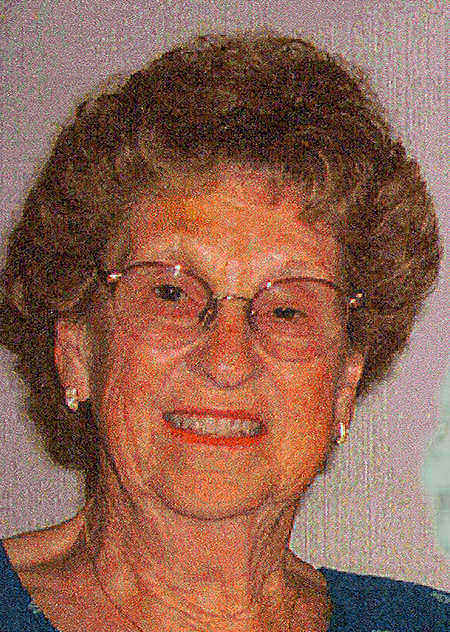 Agnes M. Green, age 85, passed away on May 19, 2011, surrounded by her family at Cherry Meadows Hospice, Appleton. Agnes was born in Antigo on June 4, 1925, daughter of the late Peter and Frances (Babler) Zollpriester, and grew up on the family farm. She graduated from Antigo High School in 1942 and also attended the Antigo Vocational School for two years. On September 16, 1950, she married James E. Green, also of Antigo, and relocated to Appleton in 1955.
Agnes was a homemaker who enjoyed cooking, sewing, quilting and crafts. She was also an active volunteer in the community. In particular, Agnes enjoyed the time she participated in the Appleton Medical Center Bizarre Women's Group. She was a long-time member of the St. Pius X Catholic Church. In addition, she was an avid golfer, bowler, and bridge player.
Agnes was a loving and devoted wife to her husband, Jim. She was the biggest supporter of her four sons during their numerous sporting events and throughout their lives. Agnes was a proud grandmother of her eleven grandchildren.
She is survived by her loving husband: James E. Green of Appleton; four sons: Michael (Janice) Green of North Augusta, South Carolina and their children: Christopher, Allison and Bradley; Patrick (Kathy) Green of Columbus, Ohio and their children: Keelyn, James and Nicolette; Robert (Julie) Green of Minneapolis and their daughters: Emily, Sara and Mia; and Thomas (Mary) Green of Appleton and their children: Tyler and Jenna. Agnes is also survived by two sisters: Betty Rew of Antigo and Bernice “Bea” Zollpriester of Appleton; and a brother: Peter (Marlis) Zollpriester of Wausau. There are also three sisters-in-law: Lorraine Servi of Antigo; Joan Grissom of Zephyr Hills, Florida; and Gail (Gerald) Henke of Cedarburg; as well as many nieces, nephews, other relatives, and many friends. Agnes was preceded in death by her parents, a sister: Virginia (Leonard) Fleischman, and brother-in-laws: Rueben Rew and Mel Servi.
The funeral service for Agnes will be held at 10:30 a.m. on Monday, May 23, 2011, at WICHMANN FUNERAL HOME, with Fr. Thomas Farrell officiating. Friends may call at the funeral home on Sunday afternoon from 2:00 p.m. until 5:00 p.m. and again Monday morning at the funeral home from 9:30 a.m. until the time of the service. Entombment will take place at Highland Memorial Park, Appleton. Memorial contributions in Agnes' name may be made to Cherry Meadows Hospice, 2600 Heritage Woods Dr., Appleton. The family would like to extend a sincere thank you to the staff at Cherry Meadows for their care, compassion, and support.

To order memorial trees or send flowers to the family in memory of Agnes M. Green, please visit our flower store.